A continuous footing receives and spreads the load of the building out amongst the subgrade below. The depth for a spread footing can be as deep at 15’or more but the most common range is from 4’-10’ (as shallow as 1-2’ in geographical areas with no freeze thaw concerns). Continuous footings are required in almost all areas for residential housing, with block, concrete, or prefabricated walls resting on them. Engineers typically spec that continuous footers be excavated and placed at depths below the ‘frost line’ which depends on the climate zone. This is enough depth so that the foundation is not reached by winters frost creeping down from the grade above.

Some amount of settlement can be expected in almost all footings, which is primarily driven by the soil makeup, soil particle size, soil confined strength, and soil shear strength.

Freezing and thawing conditions can heave foundations causing structural issues in the foundation and the building’s walls. Finer particle, higher moisture clays tend to be most susceptible to frost heave. Also, something referred to as ‘consolidation’ can occur in highly moist, high fines clay which occurs when bearing pressure above presses the moisture out of the soil, causing additional settlement that may not be accounted for.

How the excavation of a continuous footer will be approached depends largely on the soil conditions. Cohesive soils such as clays or silts which aren’t particularly high in moisture, typically can be ‘sculpted’ by the bucket of the excavator. Forming the outer edges of the footer with the soil is typically referred to as ‘earth formed’ footers. In non-cohesive soils such as sands and gravels, especially with high moisture content, have a higher likelihood for the trench walls to cave in upon excavation. This typically requires that the footers be formed with lumber or steel forms.

The trench size required for a continuous footer depends on both the size of the wall being placed on it and the width of the footer itself. The trench (especially when deeper than 4-5 feet) must be large enough for the future workers who are installing the foundation walls to be able to work effectively. The trench will typically need to be ‘benched’ some in order to allow for trench access and avoid safety concerns relating to cave-ins. Also, OSHA (Occupational Safety and Health Administration), a federal governing entity, has soil type classes grouped by their characteristics and relative safety when being excavated (Type A, B, C). Depending on the soil grade from OSHA, the benching requirements can differ in slope.

Prior to the excavating process the foundation will need to be laid out. If the building is a simple rectangular shape, the excavating crew may be able to lay out the footings with tape measures, stakes, and strings (batter).

For more complex geometry, the excavation will need to be laid out by a professional surveyor. The surveyor will typically provide ‘offset stakes’ and if requested ‘centerline’  stakes as well. The centerline stakes will eventually be removed as the excavation progresses, but allow for a visual understanding of exactly where the structure edges will fall on the existing lot prior to excavation. The offset stakes are typically offset at a specified distance (4-5’ commonly) at all the corners of the building and at certain intervals as specified or as requested by the excavating contractor.  These stakes remain during the course of excavation because they are offset from the line of the footing and allow for a constant control for the excavating and foundation crew as accurate layout information can be pulled from the stakes at any given time.  It is also common for spray paint to be placed on the ground denoting where the limits of the foundation are. 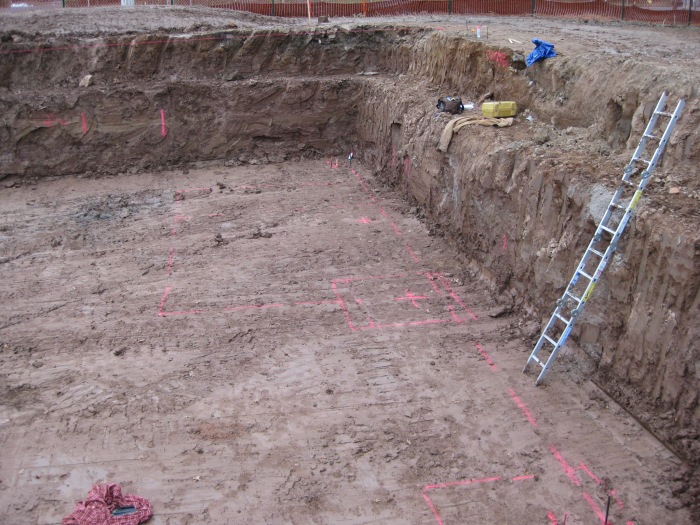 The layout for the footer excavation has to be accurate, but it doesn’t need to be precise within tenths of inches for most applications. The actual footer layout itself will require more precise layout as the entire building construction design will snowball off the layout of the foundation wall. But with this in mind, the excavation needs to be accurate enough for the continuous footer to be installed to receive the footer at the minimum designed width. For this reason, the excavator will sometimes over excavate the footing trench to make sure there is plenty of room for the footing crew to achieve the designated minimum footer width. For formed continuous footers, this typically doesn’t pose the threat of unnecessary wasted concrete material. But for earth formed footer this can cause considerable concrete waste. It can be ideal for excavating crew and footing crew to be employed by the same company, or at least have good communication.

The process of simple excavation of a basic continuous footing will typically consist of a crew of 2 workers: 1 operator, and one laborer. The equipment required will be a backhoe or excavator depending on the depth of the footer from existing grade. The excavator will typically straddle the trench and dig moving backwards. He will require a helper to be both a second set of eyes and also verify and direct vertical grade with a ‘story pole’ as the excavation progresses.

The operator will typically excavate and cast the spoils along the sides of the trench for use in backfill. Or the spoils may be loaded immediately onto one or more trucks for spoils removal.