Welding is utilized in construction for many reasons, one of the most relevant being that it offers joining metal members in a way that essentially makes them a monolithic unit. When correctly designed and installed, welding connections can be stronger than the members they are joining in resisting moment and shear forces. Bolted connections can provide the same strength but are considered by many more cumbersome in general. Bolting does have it’s advantages: quick and simple for shear only connections, can be done during adverse weather (vs. welding which often must be in a controlled environment and with good access). Also it is not uncommon to see welding and bolted connections used in tandem to utilize the advantages of each. One of the more prominent types of welding is called ‘Electric Arc Welding’ or ‘Stick Welding’.

In this fusion process a consumable conductive electrode (often a rod) is used to conduct an electric ‘Arc’ of intense heat (commonly around 6500 degrees fahrenheit) which occurs between the end of the electrode and the work area.

This electrode ‘circuit’ occurs through a series of conductive items: The metal work surface, the work cable, the welding machine, the electrode cable, the electrode holder, and the electrode itself. The electrode metal and the work metal/s are both heated/melted so much that all metal involved with the process intermix into a molten mixture that when cooled, becomes a metallurgical bond as strong as the materials it’s made up of.  The electrode most commonly utilized not only carries the arc between the tip and the work, but also itself melts and acts as the filler metal to the joint.

Arc shielding is a form of welding which utilizes a shield of gas, vapor, or slag which protects the metal in the molten pool from oxides and nitiride formations which are a result of reaction with air. These formations can destroy the strength of the welded joint.

The required thickness and length of welds are calculated by the designer to match them to the forces at work on a particular group of members. For welding small members together, sometimes a single bead is enough for a strong bond. For larger members, sometimes many passes are required to gain the specified thickness of the connection. ‘Weld Symbols’ were created to identify the different types of welds desired. An arrow is typically placed pointing to the weld joint. The symbol on top of the arrow references the weld on the side opposite the arrow, while the symbol on the bottom of the arrow references the weld on the same side of the joint as the arrow. 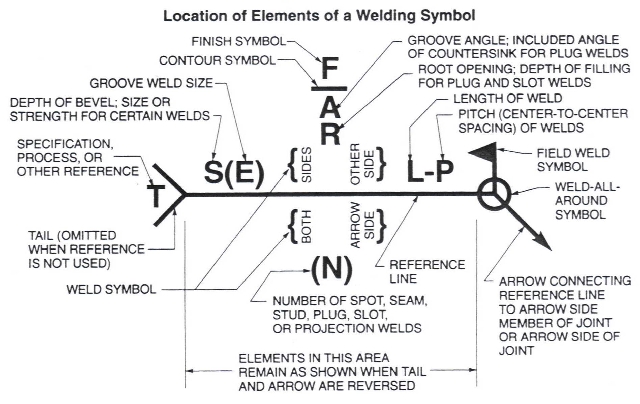 A field weld (cannot be done in shop) is denoted by a flag symbol. A ‘Weld All Around’ symbol means the weld should be carried fully around the perimeter of the joining pieces.

Welding is a trade which requires methodical training and periodical testing to ensure quality is maintained. For higher profile welding projects, it is not uncommon for testing to be done on welded connections. This testing often consists of sophisticated magnetic particle, dye penetrant, ultrasonic, radiographic testing procedures which look for hidden voids and flaws within the welds. These structurally critical welds are often referred to as ‘Demand-Critical Welds’

Other types of welding are:

MIG Welding (GMAW or Gas Metal Arc) – Most commonly used and arguably the most easily performed type of welding for commercial and home use. The MIG process is suitable for fusing mild steel, stainless-steel as well as aluminium. 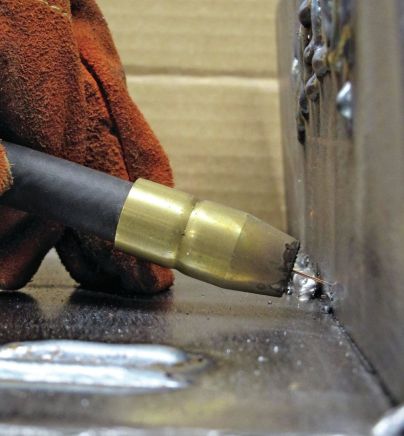 TIG Welding (GTAW or Tungsten Inert Gas) – Similar to oxy acetylene gas welding which requires significant skill from the operator. Utilized in high-quality demanding situations where high quality standard of finish is needed and minimal clean up by sanding or grinding is desired.

Gas or Oxy Acetylene – Rarely used for general welding of mild steel. Composed from mixing oxygen and acetylene gas to greate a flame capable of melting steels. It is most commonly used for maintenance work and gas metal cutting. It is also used for brazing softer metals like as copper and bronze and for welding delicate aluminium parts like refrigeration pipes. 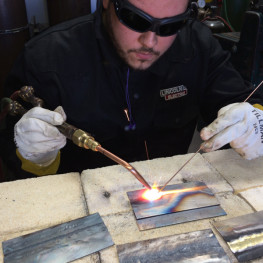