The purpose of a sanitary manhole is to allow for a human access point at certain intervals of a sanitary sewer system for inspection and maintenance purposes, and also to serve as a horizontal deflection or multi-pipe junction point for different pipes. Manholes are typically found on most streets, highways, and busy roads.  Sanitary manholes are used in conjunction with gravity or pressure fed piping systems engineered to move raw sewage to treatment plants which after treated will discharge the treated sewage into streams, rivers, lakes, and oceans.  Manholes are commonly placed every 300-400 feet in sewer collecting lines, but this may vary depending on municipalities, engineers, and design standards. A majority of common day sanitary sewer manholes are made of steel reinforced or non-reinforced precast concrete, but there are also brick and mortar, plastic, and polymer type manholes. The middle and earlier 20th century was known mostly for brick and mortar manholes. The typical common day sanitary manhole is made of concrete precast in a plant specializing in such work where their equipment is specifically tailored for precast structures.

A precast manhole is typically formed, cast, cured, and stripped in an indoor controlled environment to maximize strength and performance. Specialized steel and aluminum forms have become the standard as they provide good results and can be used many times before disposal. 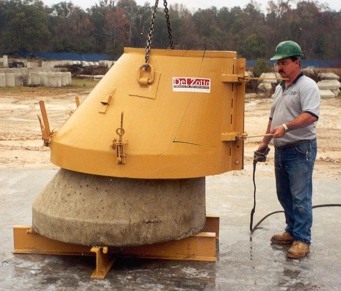 Manholes are most commonly round but may be square or rectangular as well. Sanitary manholes typically have metal, fiberglass, or polypropylene steps cast into the concrete for interior access. Manholes now have minimal dimensional standards because they are considered a safety hazard being considered a ‘confined space’.

A manhole is typically made of 2 or more pieces: the base (or base/riser combo), the riser (can be several pieces depending on depth), and the top.

The two most common top types for sanitary manholes are ‘flat top’ and ‘coned’ . Cone pieces are very commonly eccentric for sanitary manholes, but can be centered as well. Cone sections are typically available as stock in 24”, 32”, 36”, and 48” heights. Eccentric cone top’s radii typically taper from 48” to 24”. A coned top is more useful when a pipe, road section, or obstruction must be avoided thus allowing the coned top to be offset not infringing on the adjacent obstruction.

Flat tops are useful for manholes without adjacent pipes, obstructions, or roads hindering the top placement. Their hole in the top can be either eccentric or centered. Flat tops are typically available in square or round 12” or 16” thicknesses.

After a manhole is cast, if formouts were not utilized, holes are cored at pre-calculated elevations, angles, and sizes to allow for pipe penetrations.

The vertical elevation assigned to the bottom of the inside of the inlet and outlet pipe penetrations is referred to as the ‘invert’ elevation. ‘Shop drawings’ are usually sent to be reviewed by the engineer to assure everything is correct prior to fabrication. The invert elevation is a critical part of the entire gravity flow system dictating how sewage will flow, is typically designed by the engineer, and the cored holes must be placed accurately (vertically, horizontally, and at the correct skew) by the precast manufacturer. For sanitary manholes, inverts are commonly formed and poured at the manufacturing plant prior to shipment. Another purpose of the invert is to help in the flow of water and to avoid flow interruption. 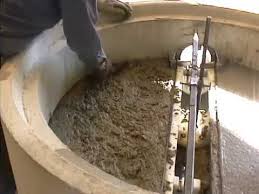 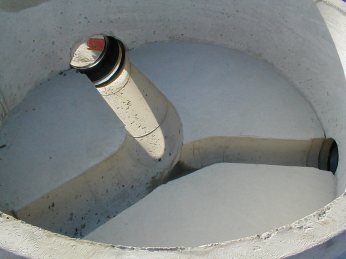 Sanitary manhole pipe penetrations commonly receive a booted connection to assure the most water tight seal possible, given the unsanitary conditions of the sewage inside and the risk of it leaking into the ground. These boots are commonly provided and installed by the manhole manufacturer prior to shipment to the jobsite. These boots commonly have a stainless steel band which is tightened around the pipe connection during manhole installation. Sometimes the manufacturer will ship the boot with a stub of pipe pre-installed so a belled connection can be made.

A manhole will typically have a ‘casting’ on top of the manhole itself which is essentially a cast iron lid allowing access and durable enough to last through weather and traffic for decades before requiring replacement.

There are all kinds of casting frames and lids types available: gasketed, vented, solid, etc though sanitary manholes typically do not have slotted or grated lids to receive drainage or allow upward flow of smell. The casting is commonly grouted or mortared to the top of the manhole structure and sometimes the engineer will even require they be bolted down. 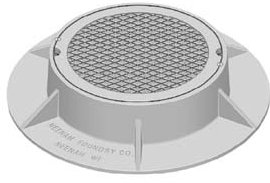 One of the more common manhole sizes is 48” inside diameter with a 60” outside diameter, but it is not uncommon to see inside diameter sizes of 5′, 6′, 7′ or larger depending on the size of the pipe passing through. Sanitary sewer manhole depths on average are typically deeper than storm manholes or catch basins because the standard gravity fed system often drains tens or hundreds of residences and businesses requiring pipe slope for each one. The common depth range for sanitary sewers is anywhere from 5’ to 20’ but it is common for some sanitary sewers to be much deeper, as much as 25′ deep or more.

The term ‘springline’ refers to the elevation at the center of a pipe which penetrates a manhole. For manholes receiving sewage from a higher elevations and requiring it to be dropped significant lengths, something called a ‘drop connection’ or ‘drop manhole’ is often required. This connection simply diverts the flow of the dropping sewage from directly downward, to a 45 degree angle down to the bottom of the manhole. This ‘drop’ may either be exterior to the manhole and later encased in concrete or grout, or an ‘inside drop’.

The typical crew required for installing a standard sized manhole consists of 4-5 workers: an operator, 2-3 laborers, and a foreman. The equipment required will be a backhoe or excavator rated to lift the heaviest piece of the manhole and a front end loader to move and place bedding and backfill material into the excavation. The excavation is then typically bedded with 4-12″ course or well-graded aggregate.  Thetypical aggregate gradation used for bedding follows the following sieve analysis: 100% passing 1” sieve, 90-100% passing ¾” sieve, 20-55% passing ½” sieve, 0-15% passing 3/8” sieve, 0-5% passing 4.75mm sieve. The purpose of the bedding is to provide a stable working platform and to provide a subgrade that will not shift or move the structure before or after installation.

The hole where the manhole will be placed is excavated large enough for the workers to install pipe into the manhole. In situations deeper than 4-5 feet or when ‘stepping back of the excavation isn’t possible or practical, a ‘manhole box’ or other trench shoring system is utilized

Once the approximate depth is calculated and excavated, the backhoe operator will pick up the manhole base with chains or slings with anchor points on the manhole and slowly lower it into the hole. There will be 1-2 workers in the hole to receive and guide the manhole base into place.

Care should be taken for the workers to never be underneath a structure piece as it is being lowered into position. Once the base section is in the correct position, the next step is to lower and interlock the riser section (or sections) onto the base. Due to the depths of sanitary manholes, it is common for many riser sections to be required to achieve the required depth of the manhole.It is common for a mastic product or pre-moulded strips be applied to the base and each riser section to help limit water infiltration/exfiltration throughout the life of the manhole.

Lastly the top is lowered and placed above the riser. Seeing that common sanitary manholes and systems serve the purpose of conveying  raw sewage only to sewage treatment plants,  ground and storm water infiltration has become very undesirable as the cost to treat sewage can be quite considerable for local municipalities.

An adjustment or ‘grade ring’ is commonly installed between the top of the precast basin and the casting. Essentially the function of a grade ring is to allow final minor adjustments in the elevation of the casting upon established the finish grade which will surround the casting. Grade rings typically come from 1” to 6” thick and can be circular or square in shape. A mastic material is commonly installed between grade rings themselves and between the top of the structure.

There is usually a limit placed by engineers of +/- 12″ on the amount of grade rings that can be installed before an actual riser section will be required.

Once the final elevation has been achieved and the manhole is permanently set in place horizontally and vertically, the excavated area surrounding the manhole is backfilled. One final step is unique to sanitary manholes in keeping out the infiltration of ground and storm water from the area on the interior of the manhole, between the manhole top and bottom of the steel casting. In this area, something typically referred to as a ‘chimney seal’ is installed in most sanitary manholes which acts as a long term seal from infiltration of water. There are both internal and external chimney seals. There are many different types of chimney seal products but the most common two are brush on epoxy product or rubber ‘gasket’ type product. 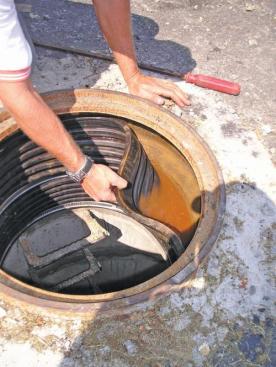 This is the final step of closing off the manhole from ground  water infiltration. Lastly, depending on whether the manhole is within an area with vehicle traffic, a ‘concrete collar’ may be required.

This is typically the last task done when installing a manhole. A concrete collar is a cast in place concrete section formed and poured around the casting giving additional strength and reinforcement to the catch basin from vehicle traffic. The concrete collar also helps resist the entire assembly from shifting or moving with vehicle traffic or freeze thaw conditions. In a new road or road reconstruction condition, sometimes the manhole castings are paved over with asphalt and the asphalt is later removed allowing for the collar to then be poured. In this situation the collar is either chipped out by hand with a jackhammer, or cored with a mechanical coring attachment. 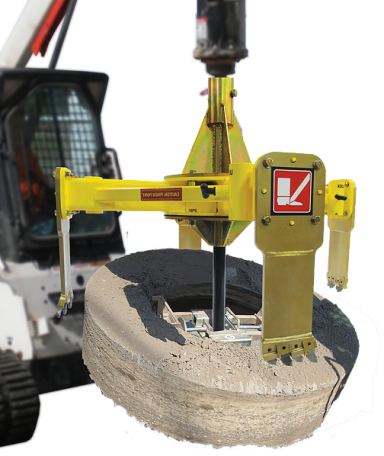 This approach is considered by many the simplest way to pave a road and in turn place the collars. For areas subject to vehicle traffic, it is common for an accelerated cure time concrete mix to be used to allow for vehicle traffic soon after placement.

The last item of consideration in installing a sanitary manhole is an infiltration test which is often done via a vacuum approach.

The pipe penetrations are sealed off on the inside and a special deviced is utilized at the casting lid which sucks air from the structure so air pressure loss can be calculated over a certain period of time. If the test does not pass, investigation and interior/exterior patching must be done which can be invasive, costly, and otherwise undesirable.