The parts typically involved are either all or part of the following: 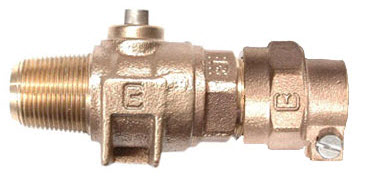 -compression fittings (two at corp stop, and on either side of meter and curb stop) 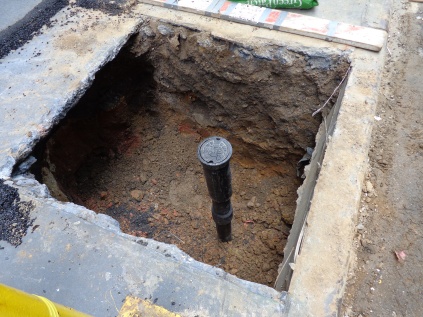 The curb stop, curb stop valve, and meter pit assembly are often (but not always) handled by the local municipality as this work often exists past the ‘right of way’ limits into privately owned property. It is also fairly common for the localities forces to handle the services taps as well depending on the situation. In this case it is common for the locality to receive excavation/backfill assistance from the contractor installing the water main.

When installing a service the first thing done is attaching the tapping saddle to the water main. Tapping saddles typically consist of a stainless steel band and a ductile iron body which work in tandem to wrap and saddle the water main. The saddle is then angled in the correct direction and tightened into place with bolts to the appropriate torque. Then the corporation stop is attached and tightened on to the saddle with a wrench.

Next the service pipe is attached to the corporation stop with a compression fitting using wrenches. This fitting is designed to compress around the pipe at the tube and corporation stop juncture making a water tight seal. Then the service pipe is run through the trench to the curb stop valve, which looks and acts very similar to a corporation stop. The purpose for the curb stop valve is to allow water service to the home to be shut on or off from above grade when necessary. Two compression fittings will typically be required on either side of the curb box valve, but they often come with the price of the valve.

Above the curb stop ball valve a curb stop box is placed. While called a box, this piece is really more of a tube or cylinder that saddles over the curb stop valve and extends all the way up to grade with a lid placed on top.  Then the service line will continue to either the meter pit or the residence. If a new water main is being installed but the service line to the house is to remain, the local authority may require new service pipe from the corp stop all the way to the right of way line, or they may allow the connection to existing to occur near the main itself.

There are many different types of existing water service pipe that can be discovered ranging from galvanized steel pipe, copper, HDPE, iron pipe, and lead among others. If the existing service pipe is determined to be lead, the local authority will typically have it replaced at least all the way to the right of way line, if not all the way to the house, as there is rising concern that lead can leech into the water and cause health issues in humans.