Wood stud walls are one of the most common assemblies utilized to build modern structures, particularly smaller commercial and residential buildings. Standard dimensional lumber is commonly utilized with 2×4, 2×6, and 2×8 being the most common. 2×6 and 2×8 lumber have become more common with increasing R-Value and insulation requirements.

For larger walls and exterior walls, the wall assembly is often ‘gang’ built into a box on the ground, and lifted into position later, saving time and allowing for construction to occur safely at ground level as opposed to high of the ground. This also helps avoid cumbersome bracing and provides immediate structural rigidity.

Firstly a ‘Sole Plate’ is installed on the wood or concrete floor, often on top of a strip of sill sealer for exterior walls. Sole plates are the same width as the wall studs and are continuous on the floor of the structures, save for doors and openings where it is terminated. In wood joist flooring construction, sole plates are facenailed to the floor joist or blocking below with a 16d nail at 16″ on center and often staggered. 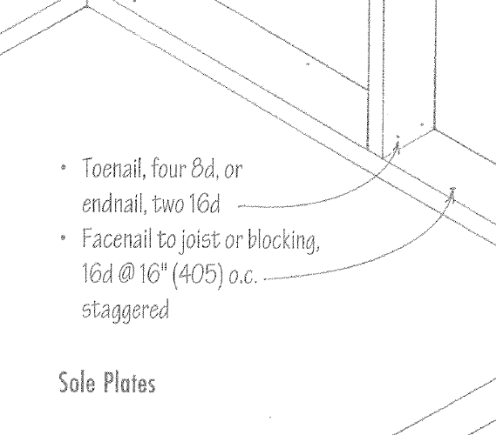 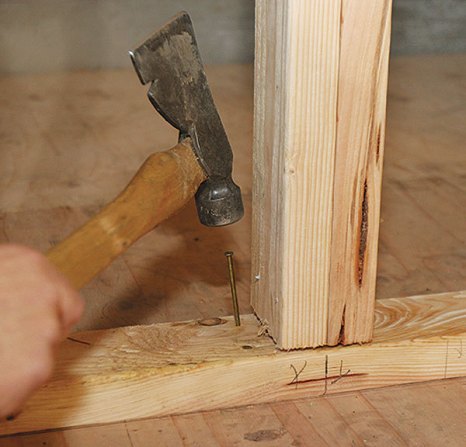 Next the actual vertical wall studs will span between the sole plate and the top plate. Studs are toenailed to the sole plate with at least four 8d nails (two on each side). 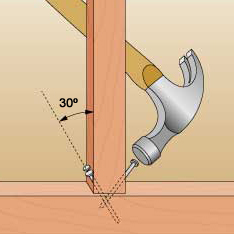 Also studs may be end nailed with two 16d nails (one on each side).  STuds are spaced anywhere from 12/16/24″ depending on the live load, dead load, and shear resistance required. Lastly top plates are installed to complete the wall. Top plates are commonly doubled for strength, and are end nailed to studs with two 16d nails. The above top plate is face nailed to the lower top plate with 16d nails every 16″ On-Center and staggered. 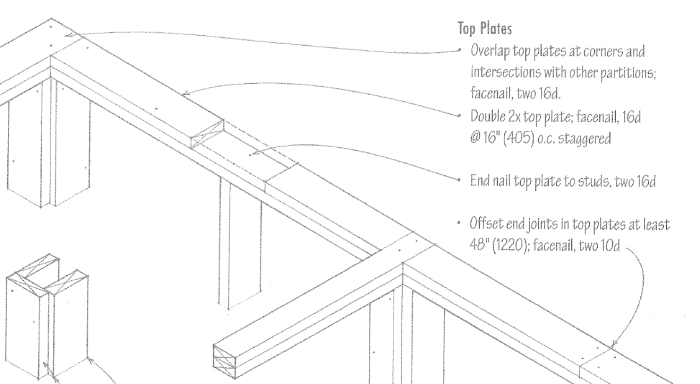 Sometimes a continuous 2×6 or 2×8 header is utilized in lieu of a doubke top plate. This assembly spans the load better to corners and in-wall columns, allowing for less window and door headers requirements.

The following are unique conditions with explanations for what type of framing approaches can be expected for each:

-Intersecting Partitions – Can be four 2x’s (two parallel to wall, two perpendicular),  three 2x’s (one perpendicular). Provide a solid attachment and adequate frame for finish materials. Where an intersecting partitionfalls between two studs, 2x blocking between the studs every 24″ is faced with a vertical 1x, followed by a vertical 2x stud.

-Corner Assembly – A corner assembly is commonly constructed with three vertical 2x studs in an applicable configuration together strengthening the corner and providing plumb and straight framed surfaced for attaching finish materials.