Soil is classified so it can be more easily understood and utilized in the planning stage. Soils are classified by:

Generally speaking there are two major types of soils:

Clay is generally composed of much smaller particles than silt, with the particles being more of a platelet shape than round or square. Clays are hard when dry and
moldable/plastic when moist. Clays have a higher ‘Liquid Limit’ than coarse-grained soils, which is the moisture threshold at which the material becomes essentially’
flowable’.

Clay soils are often ‘expansive’ or more prone to expansion/contraction when exposed to moisture content and freezing/thawing. The most susceptible clays to this
behavior are those with small particle size and high liquid limits (fat clays). Expansive soils can increase as much as 10% in volume with increase in moisture content.

Clay soils can present challenges under structures and pavements. High moisture clay can have water pressed out of it from pressure above causing a phenomenon called
‘consolidation’ occur which can contribute to excessive unanticipated settlement.

Hard, over-consolidated clays can appear to be stable when excavated but may have cracks or fissures which are shear points for sloughed chunks which may unexpectedly
fall.

Silts are a cohesive soil when a certain moisture content exists and are generally non-cohesive when dry. They exhibit similar characteristics to clay but often to a
lesser extent. Slightly moist Silts can generally hold their shape during excavation considering their higher shear strength.

Sand has larger particles than silt and clay but smaller particles than gravel. It is a well draining soil making it resistant to consolidation and frost heaving. Sand is considered a fair to good subgrade for foundations and pavements, so long as it is well-confined and moderately moist when virgin, or well compacted and moderately moist when used as fill/embankment. Sand can harbor pockets of groundwater or moisture in multi-strata soils which are surrounded by silty/clay. Sand is considered unstable in terms of trench safety and stability, especially when it’s overly saturated and relatively unconfined.

Gravel is the classification with the largest particles. It is a well draining soil making it resistant to consolidation and frost heaving. Gravel is considered a good subgrade ad base for foundations and pavement, so long as it is moderately moistened and well compacted. Gravel can harbor pockets of groundwater or moisture in multi-strata soils which are surrounded by silty/clay. Virgin gravel soils are considered unstable in terms of trench safety  and stability because of the lack of cohesive particles.

Loam is effectively a sort of mixture of all 3 major soil types.

The following is a classification pyramid based on the makeup of a soil: 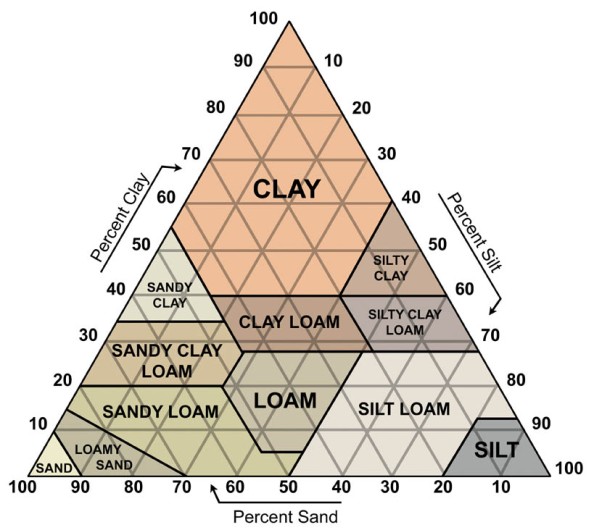 Below are soil types as characterized by the American Standard of Testing Materials:

‘Coarse grained soils, borderline clean to with fines’
GW/GC & SP/SM – Sands and gravels which are borderline between clean and ‘with-fines’ 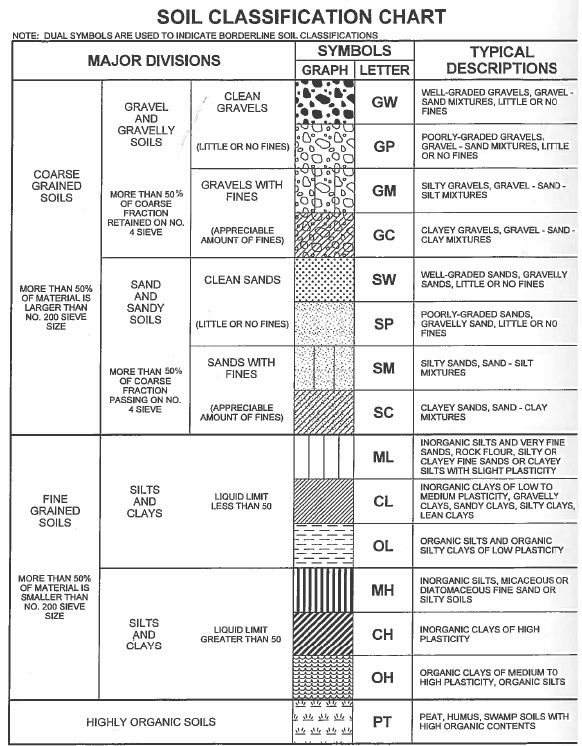 A soils ability to support loads depends primarily on shear strength which is defined as partical friction resistance to internal sliding. In anticipation of buidling
construction, it is a universal engineering principal that structures will settle to some extent. This settlement should be designed to be uniform as opposed to
‘differential’. A Geotechincal Investigation and report help the building engineer understand and plan for this settlement.

Allowable foundation pressure is measured in ‘pounds per square foot’ and measures the design strength of a soil type. The following can generally be expected for allowable bearing pressure:

The Water Table refers to the elevation where soil is typically fully saturated. This can be a misleading however as seasonal weather changes can cause groundwater
levels to fluctuate and also cause water to perch in pockets of coarse-grained soils, above and in between fine-frained soil stratas.

Soils are also classified by OSHA as per the following:

Type C – Cohesive soils with an unconfined compressive strength of 1,000 lbs/sf or less or:

OSHA classifies these soils for the purpose of setting slope/bank requirements during excavation: 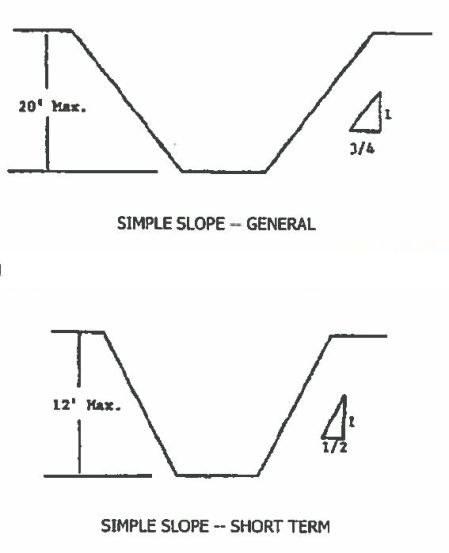 These OSHA benching/sloping requirements are general in nature, have more complex requirements as the trench type changes, must be adjusted for strata/OSHA class
variances, and are subject to change by OSHA.