A bolt is a threaded rod that has a head on one end, and is inserted through predrilled holes and tightened with a nut at the other. Bolt’s can range from 3/4″ to 30″ lengths with common lengths ranging from 1/4″ to 1-1/4″. Below is a list of bolt types, their characteristic, and uses:
Machine Bolt – One of the most common bolt types and the image that often comes to mind when a bolt is referenced. It often has a hexagonal head, partially threaded shaft, a nut at the end, and a washers at each end if necessary. Machine bolts are used to join primarily steel but can be used with other types of material as well.

Carriage Bolt – A Carriage Bolt is similar to a machine bolt but often has a round head with a square neck/shoulder which penetrates wood and seats itself. They are often used in situations where the head may be inaccessible during tightening. The square neck will resist turning when the it penetrates the wood or when the bolt is loosened after the fact. Carriage Bolts are commonly seen in decks, swingsets, docks, etc. 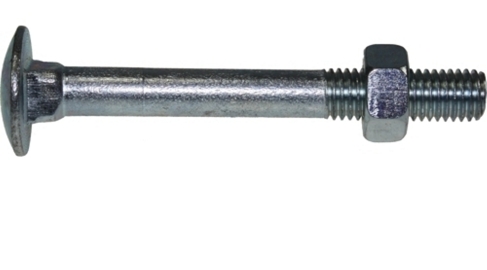 Lag Bolt – Lag bolts are used in areas where the use of a nut isn’t possible or practicle, or if the bolt must be exceptionally long to fully penetrate the joint. Lag Bolts have a pointed tip and a Hex Head

Some of the more common nots are the following:
Lock Nut – (Stop Nut) Is a nut which resists loosening from vibrations and torque.  There is typically an elastic stop inside the nut which seize the shank of the bolt upon tightening.

Cap Nut – A cap nut or acorn nut protects and gives a finished look to a bolts exposed end. They also prevent stripping of bolts particularly on engines and machinery parts. Brass acorn nuts are typically chosen for plumbing and electrical applications. 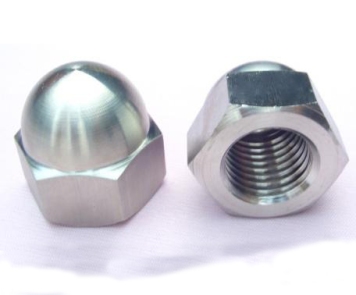 A washer is a perforated metal, rubber, or plastic disc, used under the head of a bolt to relieve friction, prevent leakage, distribute pressure, or insulate materials from touching that are incompatible. A spring-lock washer or an External-Tooth Lock Washer are made to prevent a nut from coming loose.

A load indicating washer has projections that are flattened during tightening which indicate when the correct tension has been reached.