Fire hydrant’s are made of cast iron and are primarily meant as a water source for fighting fires, but are also used for public water access. The two types of fire hydrants available are dry barrel and wet barrel. Wet barrels are filled with water at any given time and are typically used in warmer climates. A dry barrel is meant for colder climates where the possibility of the water freezing is a concern. 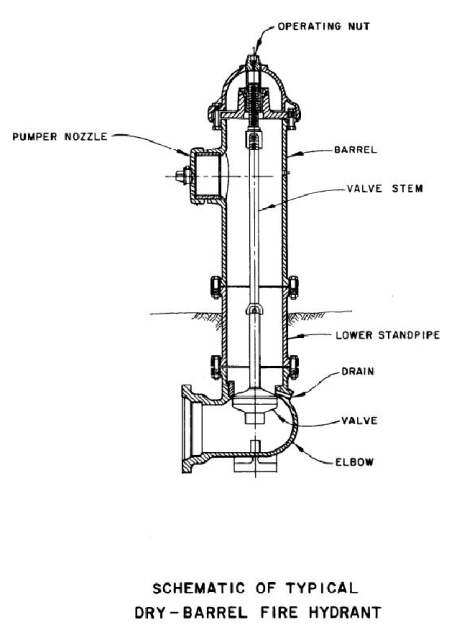 Most hydrants utilize a hose connector called a ‘Storz’ connection. The Storz connector is proprietary and the threads universally fit most fire truck hoses.

Fire hydrants are typically coupled with a watch (or gate) valve which shuts off the water source from the main line allowing maintenance, repair, or replacement of the hydrant. 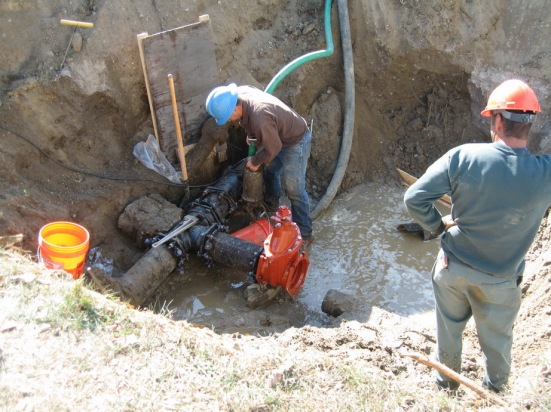 A complete fire hydrant assembly consists of several pieces. The complete listing is as follows: Tee (to branch off the main line), an anchor coupling to connect or anchor the tee to the watch valve, a watch (or gate) valve, a valve box for above ground access to the watch valve, another anchor coupling to connect to the anchor coupling, the hydrant itself, and several megalugs which are essentially permanent cast iron ring clamps which include gaskets and bolts that reinforce the ‘restrained’ joints where pipes/couplings/fittings etc attach to each other by way of flanges. Their purpose is to strengthen the connection points against the pressure of the water.

The typical crew for fire hydrant assembly installation will include 1 operator and 2-3 laborers. The equipment required will be a backhoe for lifting the heavy cast iron parts down into the hole.

Before installing the hydrant you’ll need to be sure you have the correct bury depth hydrant. This refers to the dimension between the elevation of the main line and the planned final grade elevation which should be slightly below the seat ring. The depth of the lower barrel foot piece should match approximately with the elevation of the existing water main.

Once the ‘bury depth’ of the hydrant is verified and all correct parts are in hand, the hole can be excavated and is usually bedded with course granular aggregate. There is typically 1-2 men in the excavated hole receiving and guiding the parts as they are slowly lowered into the excavation with the backhoe and ropes/chains, etc.

First the tee will be installed on the main line which provides for attachment of the anchor pipe that will lead to the watch valve assembly. This branch line which is typically perpendicular to the main at a true 90 degrees is usually a piece of 6” pipe but can also be an anchor coupling if the dimensions allow. Depending on how far the hydrant assembly is offset from the main line, this pipe can go anywhere from 12” to 20’ or more.

Lastly the hydrant itself is lowered into position and tightened into place. A concrete support or wooden block is placed under the watch valve or hydrant bend for additional support and is often left in place.

Once the entire assembly is in place, it can be backfilled. The material used for backfill should be coarse aggregate or fine/course graded aggregate to assure isolation and proper compaction of the hydrant assembly.